Whoever Tells the Best Story Wins (like Joshua Bell) 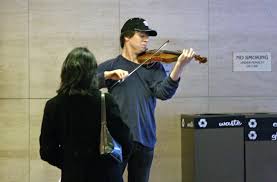 Washington DC in the L’Enfant Plaza station on a cold January morning in 2007:

One man plays six two Bach pieces, one Massenet, one Schubert, one Ponce, and one Mendelssohn for about 45 minutes.

During that time 1,097 people walk past at rush hour, most of them on their way to work.

Three minutes go by before something happens.

Sixty-three people had already passed when, finally, a middle-aged man notices there's a musician playing. He slows his pace, and turns his head before hurrying on to meet his schedule.

After two minutes the mystery violinist receives his first dollar: a woman throws the money in the box placed before him and continues to walk.

At six minutes, a young man leans against the wall to listen to the player for three minutes, then looks at his watch and starts to walk again.

At ten minutes, a 3-year-old boy stops, but his mother moves him along hurriedly as the kid stops to look at the violinist. Finally, the mother pushes and the child continues to walk, turning his head at the same time. This action was repeated by several other children. Every parent, without exception, forced them to move on.

At 45 minutes, the musician plays on. During this entire miniature concert, only seven people stopped to listen for a while. Twenty seven give him money but most continue to walk their normal pace. The take: $32 in sixty minutes.

At one hour he finishes playing and silence takes over. No one makes a fuss. No one applauds. There was never a crowd, not even for a second.

Who was this mystery violinist?

It was none other than violin virtuoso Joshua Bell. Three days previous Bell had played similar pieces to a sold out theatre in Boston where the seats averaged $100.

(here is the video from the subway experiment)

The event was a test of whether, in an incongruous context, ordinary people would recognize genius.

How does this apply to selling your architecture services?

You are no different to Joshua Bell playing in that arcade incognito.

Playing without his story, Bell earned $32 for the hour. With his story and an appreciative audience that sees him as ‘special’, he earns $1,000 per minute.

Any design genius you possess floats over the masses like the rush hour crowd, oblivious to Bell’s virtuoso performance.

If Bell needs his story – then you definitely need yours as well.

Whoever tells the best story wins.

You can spend the next few years trying to work it out on your own, or you can be taken through a simple process that will help you develop your story in the Petrie Method.

The Petrie Method is a simple, systematic framework for qualifying, communicating with, and winning the best clients. You can get a free Petrie Method training video here.

Should You Attend A Live Event?

The ‘Marketing Checklist’ For A Residential Architecture Practice