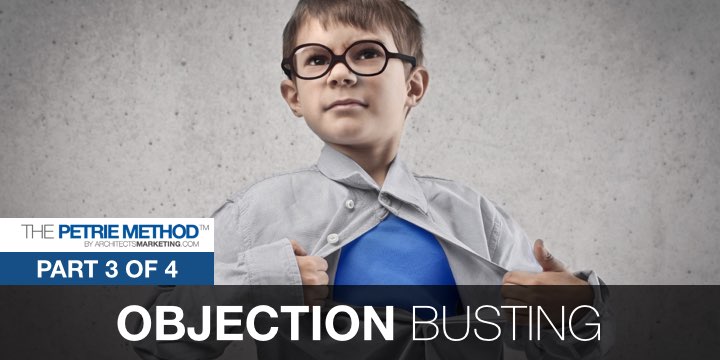 Selling design services can, at times, be a tough way to make a living. But imagine approaching a tough potential client, knowing her objections before she even asks them. That would almost be fun.

But we can make life even easier.

Now imagine having a master of persuasion accompany you to all appointments. A selfless super star that whispers the right words into your ear.

Would you charge higher fees or compete for better projects if you had the magical ability to never ever be halted by words?

Pure flight of fantasy? Not really.

About four years ago I came across a man dubbed the ‘Script Doctor’ and the ‘Prophet of Profit’. He studied the language patterns of the Olympic athletes of the selling world. His goal was to reveal the patterns of language they used to overcome any objection they ever got presented.

His research was the subject of his 271-page doctoral dissertation, ‘A Psycholinguistic Study of the Patterns of Persuasion of Ultra-Successful Salespeople’. Quite a mouthful.

It was the first doctoral dissertation ever written on the compelling speech patterns used by the world’s top salespeople.

Dr. Donald Moine has worked with 50 of the top Fortune 500 companies, and charges around $75,000 for the custom made responses, using these patterns to create a sales script book for their staff.

You could probably list 100 objections, but most architects usually find 5 – 8 that come up 80% of the time.

The script doctor uses the DNA of language structure to repel and reverse any resistance. Businesses experience a 1,000% return on investment for every one dollar they expend developing a top quality script book for their salespeople.

Their best sales people and the newest ALL have access to the BEST prepared responses for common objections.

Some companies that invest the time and money to develop mastermind script books have guarded them under lock and key to keep them out of the reach of their competitors.

Others print red ink on red paper or blue ink on blue pages.

Because when you try to photocopy, the pages come out nearly all black, making it difficult for spying employees to sell the phrases to the competition!

Are these security moves justified?

You can decide. At stake are tens of millions, to hundreds of millions, of dollars in extra sales and profits for each company. No one would go to this trouble to guard ordinary training materials or company sales brochures. But, sales script books are different.

I Was Skeptical Of Scripts

I have always been a fan of persuasion, but the idea of scripted responses had me worried I might sound robotic and unnatural.

Yet, think of actors who completely engage the audience into accepting they are the character they are acting out. Would Tom Hanks be more convincing as Forrest Gump if he were making up the words as he went along? Of course not. Each word was carefully selected, rehearsed, and adjusted until it worked perfectly.

News anchors read a teleprompter script because they would sound WORSE if they ‘freestyled’. Singers follow their lyrics to make their performance BETTER, not worse.

Exactly the same is true of a sales presentation or pitch.

I am not suggesting a 60 minute presentation should be scripted word for word, but rather key areas should be dealt with in a uniformed scripted way. Phrases can be used as required.

In the live televised presidential election debate between Walter Mondale and Ronald Reagan, the issue was Reagan’s age. If elected, he would become the U.S.'s oldest-ever president.

Reagan’s strategists developed a script to counter this objection, which many believed turned the tide with one single sentence.

“I will not make age an issue of this campaign. I am not going to exploit, for political purposes, my opponent's youth and inexperience.”

Everyone laughed, including Mondale, and the burning issue of age was watered down with one line.

Like Reagan needed his script doctors – you need your coach.

… Or you can be taken through a simple process called ‘Objection Busting’ – by Richard Petrie in the Petrie Method.

This module outlines exactly how to collapse beliefs and dismantle objections like a $400/hour courtroom lawyer. It will help you easily dismantle common objections like “Your fee is more than architect X,” or “We need our project done more quickly”. The Petrie Method is our proven framework for sharpening your tools so that you can chop down obstacles in your way to winning more of your ideal clients and projects.

Click here to get the video training on the Petrie Method.

What Does AMI Offer? (Answers to 5 Frequently Asked Questions)